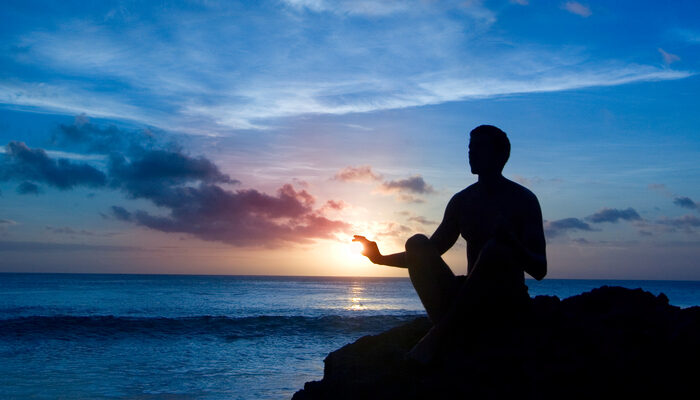 There’s no denying 2020 was a Mongolian clusterf*ck (yep, that’s a technical term) of a year for most of us, and I say this as someone who lost not one, but two Dads in 2019.

And now, as the uncertainty (or shock, at least) of 2020 fades, the ‘party like it’s 1999’ nihilism rescinds ever so slightly, and we move into a new normal (f*ck, I hate that term), I find myself more than ever looking for ways to maintain a sense of perspective and calm, to live in the present and find gratitude & joy in the important things.

To that end, and to keep me accountable, I’ve compiled a list of some of the tactics I’m employing, and where I’m able to, recommending some low-touch alternative options for anyone who might still be locked down and not able to get about as much as they’d like.

Beloved of bio-hacking wonks & pseudo-influencers, infra-red saunas (as opposed to traditional “dry” saunas) are, quite literally, so hot right now.

They use light instead of heat to warm your body, and thus by warming you directly but not the air around you. This makes them more tolerable for longer than trad saunas which warm the air around you and, by definition, you.

They claim to have all manor of life-enhancing benefits including, but not limited to, flushing out nasty toxins, reducing inflammation, pain relief, improved circulation. Pretty groovy, huh?

Well, the jury is still out on most of these and the research undertaken to date isn’t mature or conclusive. However, the same benefits that can be derived from normal dry saunas, such as increase heart rate, dilated blood-vessels & vigorous sweating, are very much on display here and there’s no real danger or downside to this.

I recently popped my infra-red cherry down a Wildfire Wellness in Maroubra, and the whole experience was rather trippy & lovely.

You’re in your own prive cabine (i.e. your own sauna) with full bluetooth & wireless connectivity so you can listen to your choice of music, podcast, meditation, or read a book, while you cook, drip and watch the clock. 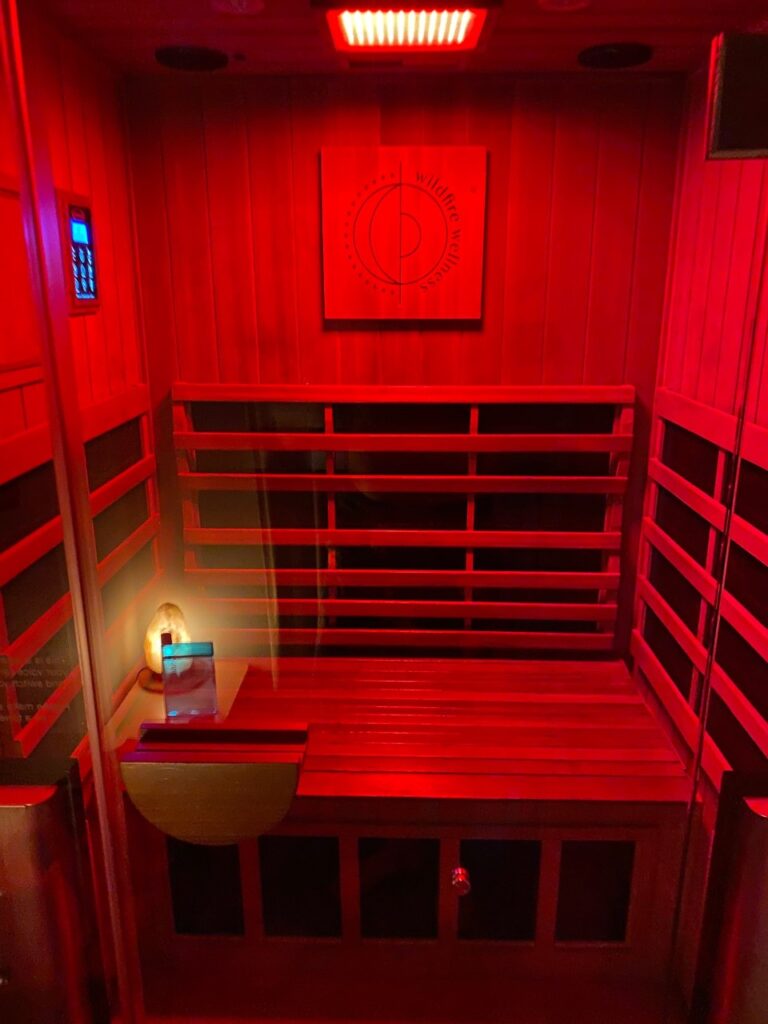 My personal sweat-cell for the next 40 minutes

For those wanting to up the woo-woo factor, you can change the lighting, with different colours affecting the chakras differently.

The sessions are a standard 40 minutes and I embarked fully anticipating that I’d be ailing somewhere close to the halfway point. Miraculously I got through it all with only a couple of door-opens to let some coolness in.

Irrespective of the pro-science being seemingly overblown at this stage, I’d recommend an IRS as a means of chilling out, sweating it out and resting it out for 40 minutes once a week.

Likely set in a yoga studio (but not always), you rock up & set out your stall in exactly the same way as you would at a yoga class. For me, this generally means towards the back, or at the very back, of the room so nobody can see just how atrocious a yogi I am.

And then you lie down and the healer / practitioner will commence with creating a soundscape using whatever tools of the trade he or she prefers. 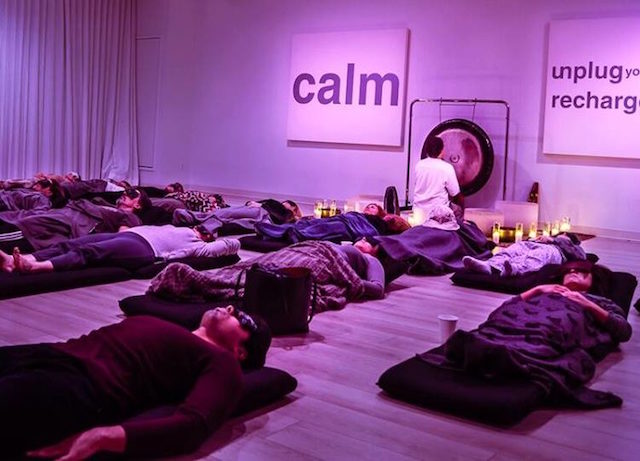 The ultimate way to unwind

Ideally you’ll focus on the sounds and let them take you on a journey of some description. As with other forms of meditation, you may find your mind wondering about your issues of the day. Try and tune them out if you can and get back onto the sound.

Try not to fall asleep also, but this happens to the best of us. Don’t, whatever you do, though, be the snorer who ruins the class for everybody. You’ll achieve instant pariah status.

As you’d expect, the science surrounding this is somewhat, shall we say, subjective and open to interpretation.

Here’s my slant, however. For $20 or $25 (or less if you get a trial deal that most yoga studios offer these days) you get:

And, maybe, depending on how it takes you, you get a freaky soundscape journey as an added bonus.

For these reasons, I’ll take it as the deal of the f*cking century.

DIY Home Tip: Search Tibetan Singing Bowls on your music streamer of choice, select one of the options, make yourself comfy & free from distractions, and enjoy the serenity.

Chances are you’re not breathing properly. Well, not all of the time anyway. I’m sure as hell not.

But, don’t worry, there is a chance to rectify this before you become socially ostracised and people avoid you in the street, shouting “mouth breather,” as they pass.

But breathing is kind of a thing nowadays, largely but not exclusively thanks to the efforts of the irrepressible Wim Hof (aka The Iceman). 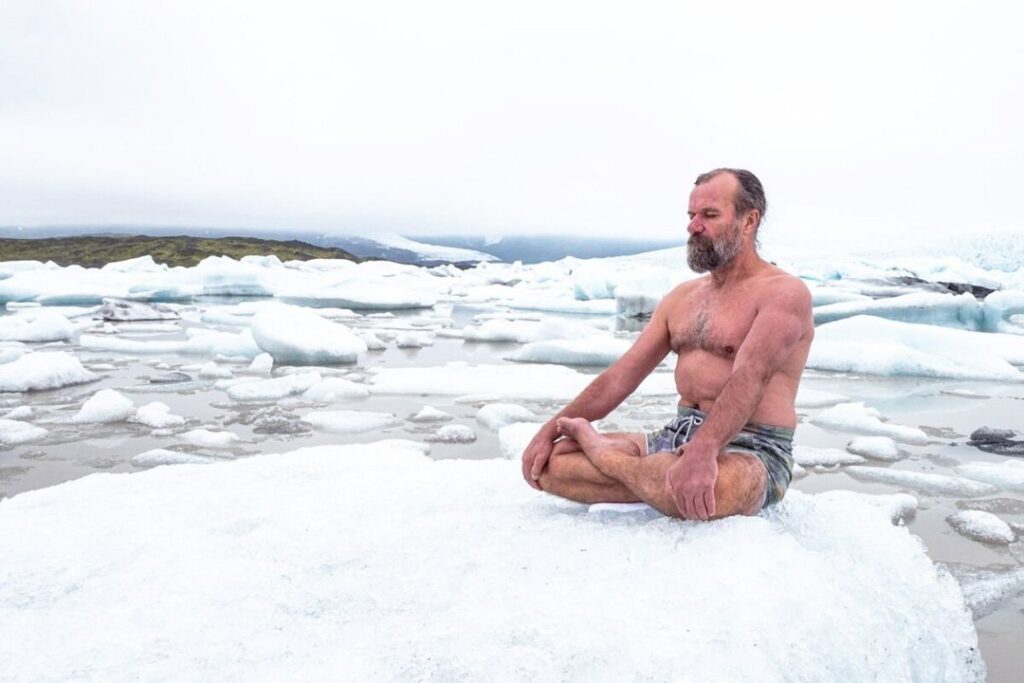 Wim Hof in his element – the ice.

Although mostly known for his feats in weathering extreme cold (many, may world records including an hour in an ice bath and climbing to Mount Everest Base Camp in just his grundies), much of his teaching is based on the breath, with the cold merely being the tool to test & measure.

The Hof (no, not that one) has paved the way with breathwork to the extent it has now become a fully fledged thing with several books devoted to the art of breathing properly, and practitioners who run training courses and classes devoted to it.

I recently took the little fella (#superfitkid) for a breathwork session with Dean ‘Deano’ Gladstone, famous, amongst other things for being one of Bondi’s heroic lifeguards in the tv show Bondi Rescue.

Fully expecting a meltdown after ten minutes or so, we got through the full hour without so much as a murmur of discontent (not bad for a 7 year old), and we all took a lot out of the session.

Recommended reading if you want to learn more about this includes (both linked):

DIY Home Tip: I use an app called ‘Worry Breath’ which is a free Box Breathing timer. Box Breathing involves a simple: inhale – hold – exhale – hold protocol, each for 4 seconds. And you do it for as long as you feel like – I do it in blocks of 3-5 minutes.

Hand-in-hand with the Wim Hof breathwork described above comes the dreaded ice-bath, literally submerging much of your body into a bath or garbage bin or portable pool type of thing filled with icy water.

And staying there for between two and five minutes, ideally. Or until your nuts shrivel back inside your body like hibernating squirrels making a dash for it.

Much like with infra-red saunas, the scientific evidence supporting the use of ice baths isn’t mature of completely conclusive yet but benefits can include:

There’s also something extremely rewarding and empowering about getting into an ice bath and toughing it out for five minutes despite every fibre of your being urging you to get out.

It’s the old ‘get comfortable being uncomfortable’ scenario which, whilst a little hackneyed and cliche, resonates strongly with the lifestyles that many folks lead these days. Sitting in a wheelie-bin filled with ice exemplifies this at the most primal of levels.

The concept itself isn’t new. Back in the early 2000’s, distance runners were using ice baths. So, too, were rugby types.

But then it was simply a recovery thing. Now it is much more tied in with overall health, wellness and respiratory function.

Which isn’t a bad thing at all.

DIY Home Tip: You could simply buy a couple of 5kg bags of ice from a petrol station, pour them into a cold bath and sit in it for as long as you can manage. I used to do this during marathon training years ago. Then the water only covered my legs and 5 minutes was plenty.

Kirtan is based in the Vedic tradition and is essentially a call-and-response based chanting meditation, generally led by a harmonium player and a drummer of some sort who drop the bass-lines and lead the chanting.

It can be pretty high on the woo-woo scale for those who haven’t done it before, but it’s also a very chilled out and soothing environment, although some of the tunes do reach a frenetic crescendo as they move through the gears.

You can sit and the back and observe if you like, but eventually you probably will be inspired to jump in a drop a few bars with the group.

Kirtan also seems to be closely linked with food and there are often yummy snacks or even a delicious vegan meal at the end.

Go with an open mind and heart and you’ll be very well rewarded.

DIY Home Tip: Search for kirtan on your musci streamer of choice. I like the Kirtan Wallah album by Krishna Das. Whilst not strictly kirtan, the album by Ram Dass & East Village is also very relaxing.

Walking in nature or shinrin yoku (Forest Bathing in Japanese) is aimed at stemming the rise of ‘’Nature Deficit Disorder’, which, with more & more people living primarily in cities and the proliferation of social media, is becoming increasingly pervasive.

Basically, as a species, we’re spending less time outside and this is widely accepted to be sub-optimal for human health & longevity. 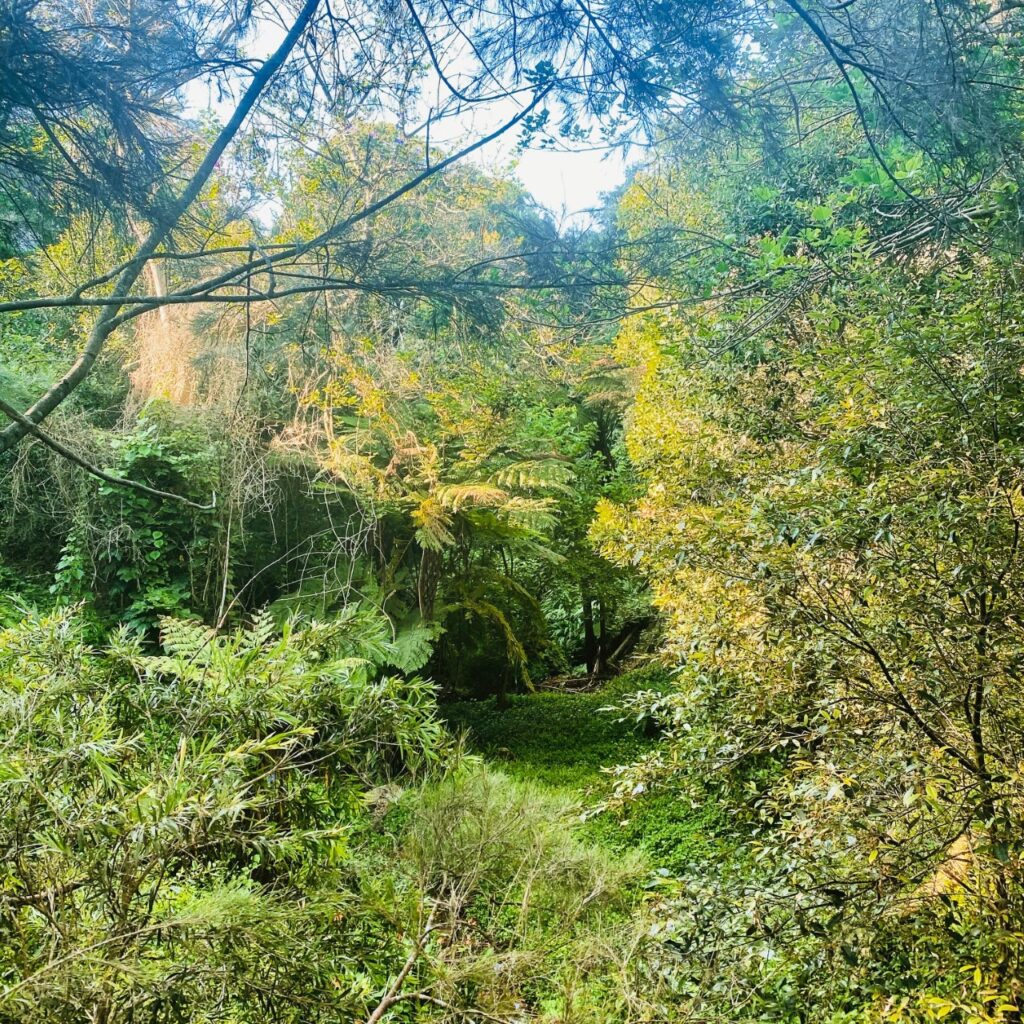 My daily dose of greenery

By being in nature, the theory goes, and unplugging from nature you can simply let your body & soul unwind and instantly begin to relieve yourself from stressors, as you submerge yourself into a far more natural environment.

And that’s all I got.

These are my current staying sane tactics. All of useful to varying degrees and with varying frequency. If you are stressed or feel like you need a little self-love, give one or more of them a go. They haven’t let me down so far.

The Perfect Diet For Dads (and just about anybody else)

I’m back at my second home, the East London pad of my brother and his…

Feeling a little stuck in your training? Life generally feels like its happening around you…