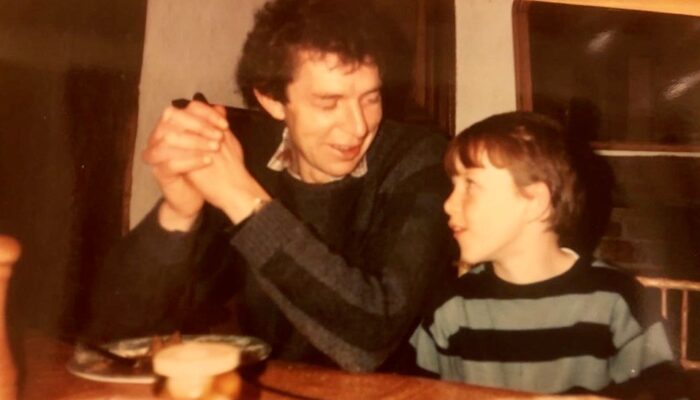 I’m back at my second home, the East London pad of my brother and his family. My second family.

Another month, another funeral, another Dad lost.

But this time it’s the real deal, my actual Dad.

Perched adjacent to London Fields – whose name chimes eponymously in my head with the Martin Amis novel – we’re in an enclave that fifteen years ago would have been described as “multicultural” and way more dangerous than edgy.

Nowadays, whilst it’s still fringed by some very cosmopolitan estates and it’s always wise to keep one ear-bud out whilst walking home at night, the smell of danger has been replaced by that of  recently roasted Ethopian coffee beans and the leather of freshly-bought Birkenstocks.

Here I’m tossed into the cyclone that is their daily life, with two working parents and two boys under six.

My first task the morning after my arrival is to take the boys to school. With jet lag. Magic. 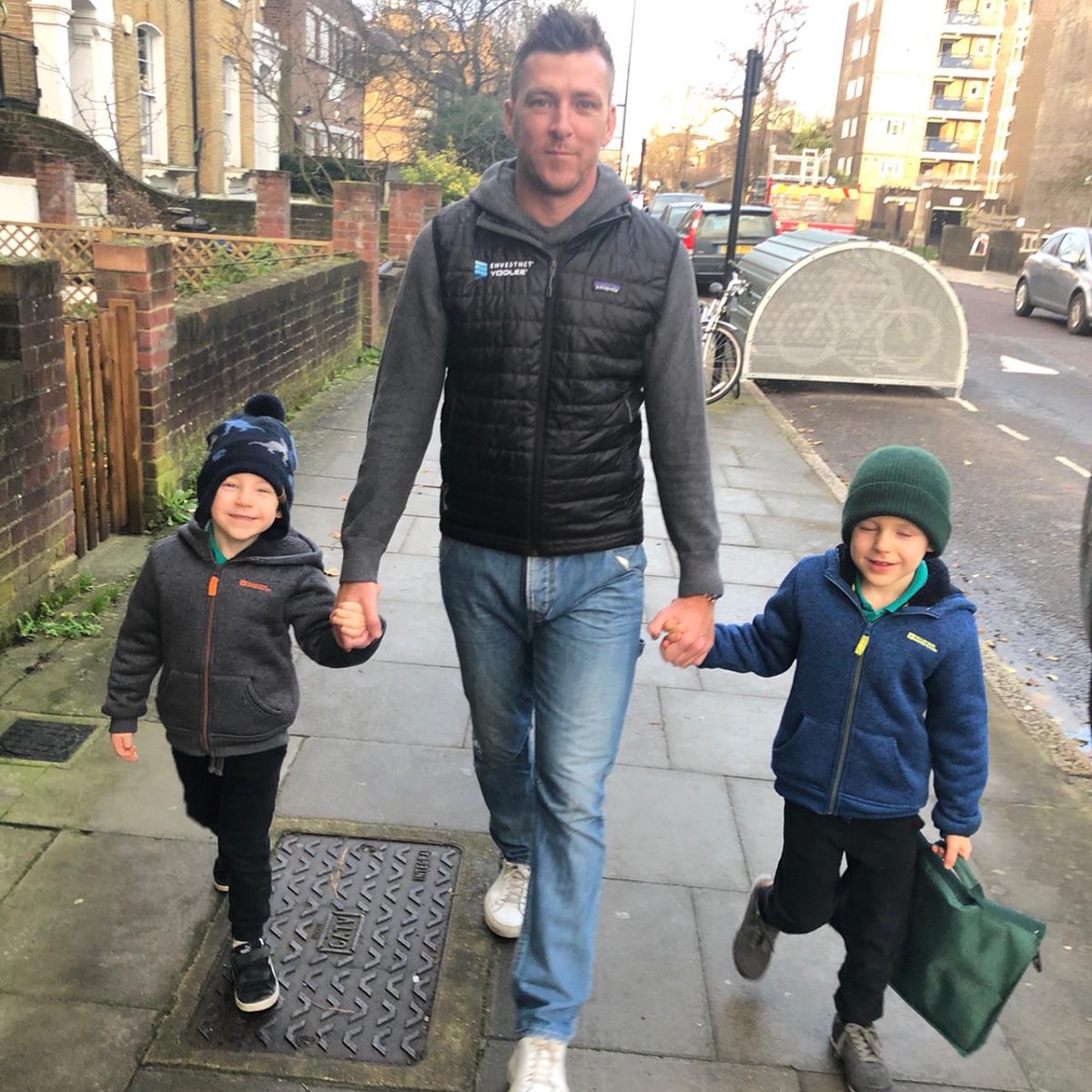 The school run here has to be seen to be believed.

Gayhurst Primary School, which sits on the edge of London Fields would be the kind of school whose population would once have been over 85% non-white.

Morning drop-off in the school yard reveals that, based on the parents alone, the school population has shifted and, while the 85% stat remains, it’s the parent-count that is now at least 85% ‘strong-hipster’.

And, bizarrely, very few of them seem to have jobs. At least in the conventional sense.

A bourgeois melting-pot of journos, rock stars (the lead singer from Death In Vegas, no less), wine buffs (my brother) and day-traders (I’m guessing) stand around chatting about whatever the middle-class chat about, as kids with names like Wilkie, Tuppence, Archie, Enid, Rueben and Flopsy run amok, climbing onto whatever they can find, gloves & scarves flailing wildly behind them.

I don’t remember my school drop-offs being like this at Frisby Primary, but perhaps they were.

At 9am the school bells rings (or maybe that’s just in my head). Regardless, the kids line up and funnel into class. The parents bolt for the school gates like hot-footed burglars.

After the school drop-off, it’s the Sainsburys run with my brother, who is allegedly working today.

I always tag along because English supermarkets are infinitely better and cheaper than their Australian counterparts, and Sainsburys used to be my shop of choice back when I lived in England.

I was such a regular down at the Castle Marina Sainsburys in Nottingham that the trolley-guy came to my birthday party one year. Top lad, but sadly he didn’t get invited the following year.

My brother treats the Saino’s run as if it’s an Olympic sport, and he’s Daley Thompson. First, a list is prepared jointly by him and my sis-in-law, often the night before. Apart from the school drop-off, this is possibly the most middle-class thing you could ever see (or hear).

The care and thought that goes into the preparation of this list is mind-boggling; it’s as though they’re crafting a Peace Treaty for the Middle East. Different types of lentils are agonised over. Same with rice. Then it’s types of cheese. Whether the Thai curry should be green or red. The type of lamb for the five-hour ragu. Organic fish-fingers for the boys.

All of this is written on a scrap of cardboard no bigger than a nightclub flyer in the tiniest and worst hand-writing imaginable. It’s as though he’s going shopping with an ant who masquerades as a doctor in his spare time.

As he roams the aisles with his trolley and his list like a stealthy serial killer, I mooch around, catching up with old acquaintances from my times in Sainsburys (Angel Delight, anyone?) and marvelling at the selection and the prices. I sneak a few things into the trolley whilst he’s looking at sun-dried tomatoes or artisanal sherry vinegar.

Once home I escape to the coffee shop where I order a large flat-white and a latte for us, asking for two sugars in his flatty and one for my latte.

“The sugar’s over there,” says the hipster barista, pointing to a bench across the shop with some sugar jars on it. Well, be a good boy and run along and put the sugar in, I think.

“Put the sugar in,” says smooth-groove, handing me the cups.

I’m gonna have to go over there and put my own sugars into the cups of coffee that you’re making, bring the cups back to you and then wait while you make the coffee? For a not insignificant amount of money – around 4  GBP a pop.

This is some kind of shake-down and one I can’t let go.

“I’m sorry. I don’t live here,” I say (which is normally good cover for when you’re about to be a bit of a dick). “But isn’t that really weird? Shouldn’t you be doing that?”

“It’s our policy,” the barista and the counter-lady say in unison.

This is a losing battle, I can tell, so I bow out before they deface my coffee with saliva or worse. Holy heck, what an absolute gip, I think to myself as I slope out, thoroughly chastened.

The next day it’s raining cats & dogs so the school drop-off becomes a sea of Hunter wellies in an assortment of colours. And that’s just the children.

Besides Birkenstocks, is there anything more annoying than a city-dweller wearing gumboots?

Nothing springs to mind. And…..nope, still nothing.

And I wonder about the lives of these – clearly well-monied – folks and whether they feel the same inner-angst about cous-cous and red & green peppers that I feel about being able to, say, pay the mortgage or buy lunch.

Probably not, I decide, feeling thankful that there’s tons of free stuff to do in Australia. Like going to the beach.

Without the beach I’d be both destitute AND bored, a terrifying combination.

The “big” day comes around and I warm up with a brisk 4 mile run around the country lanes of Lincolnshire. At 3 degrees centigrade, I’m woefully under-dressed in just a t-shirt so throw on the Patagonia vest which turns me into a boxer trying to cut weight before the weigh-in.

I come home with arms I can’t feel from the cold and a mid-section like a furnace. It’s a decent jog.

The funeral itself is quite an uplifting affair, although I must confess that I didn’t understand parts of it as some Catholic elements slipped in.

The eulogy was to be split between my brother and I which meant, of course, I write it, he then critiques it, and I then read it at the service. A somewhat inequitable division of labour you might say.

I think I just about got away with it. 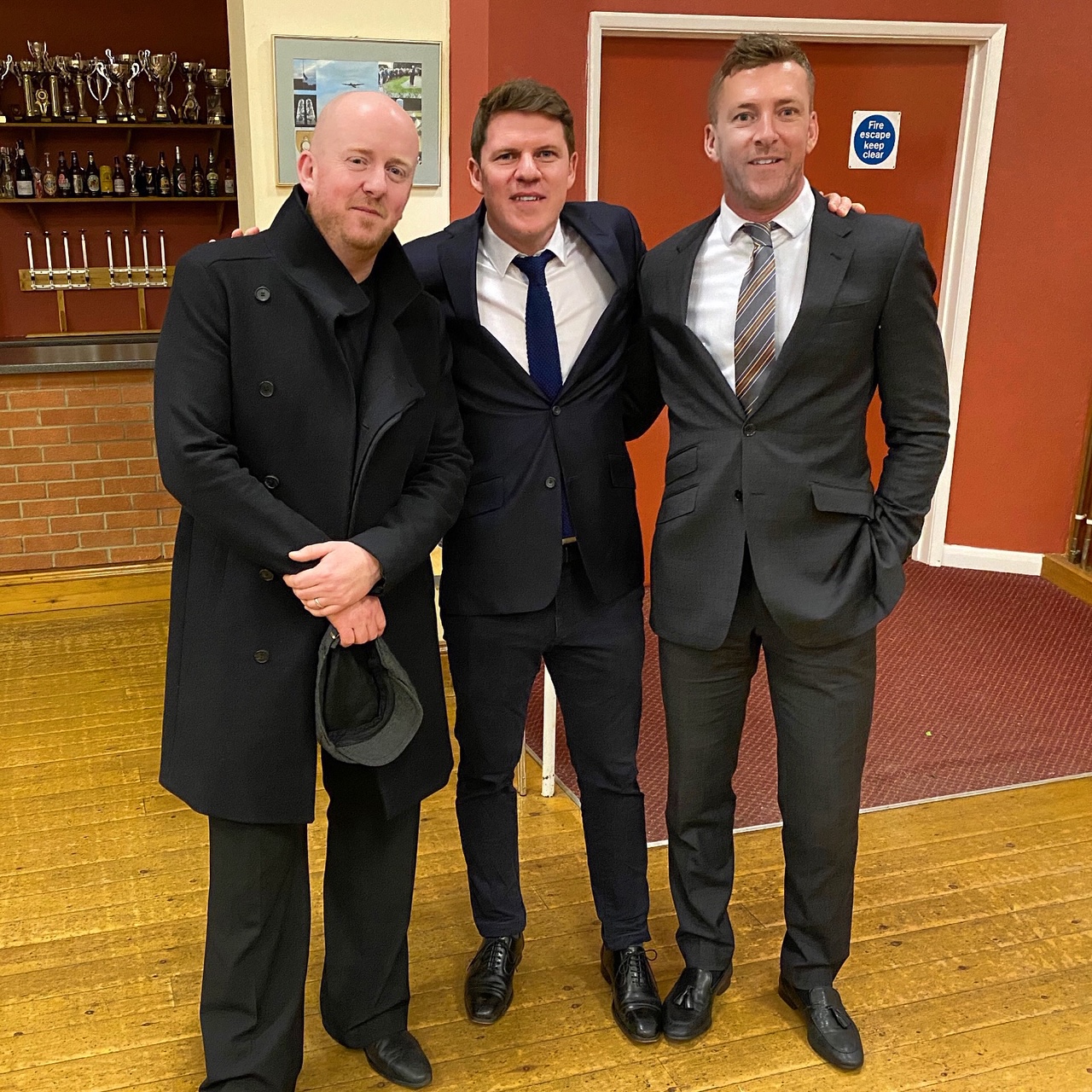 The feedback was good but who’s going to give rubbish feedback to a eulogy? Maybe the barista at that coffee shop? Nobody else.

V-Dawg (the sis-in-law) says she was ready to punch the air or give a standing ovation by the end, which is more than anyone could hope for. I’ll take that, even if she was just being polite and familial.

The writing of it, both in Sydney and then the Qatar lounge at Doha airport, brought back so many memories and not a few tears either, that I felt all of me that could go into the speech did go in. And yet still there were bits I somehow left out.

There are a smattering of tears, but plenty of stiff-lipped British stoicism to go with it, and a whole lot of warmth and love. Stories abound of tennis and holidays and larks. Bob Dylan lyrics and concerts are a hot topic of conversation. The beer at the bar costs $2.50 a pint (in British money).

Dad would have loved it. In fact, he’d have probably had an ale too many and told some shit jokes.

Back in London, my brother decides to break with tradition and have our little remembrance luncheon not at Helene Darroze at the Connaught, but at The Greenhouse, a two-starred joint whose chef used to be at Darroze.

It’s a peculiar quirk of my family that any life event or milestone is met with a luncheon to celebrate and enjoy and remember. Death is no different.  I don’t know if this is good or bad, but I do know that it is an environment in which we’re  comfortable and it draws us together.

This probably harks back to the days of Sonny’s in Nottingham, one of two fine-diners (along with Harts) in the city back in the early nineties, where many a family birthday meal was shared and then, later, I took dates, inspired by the restaurant reviews of A.A Gill & Michael Winner in the Sunday Times, during what I like to look back fondly upon as my Kenneth Tynan-inspired dandy days.

My brother and I now ritually head to Mayfair for a stuffy lunch whenever I visit. This habit started a few years ago and has become firmly entrenched. It’s possible to seek out bargain set-lunches at some of the grand-dame Mayfair hotels, laden with Michelin stars and eat like a proverbial prince on a pauper’s salary.

The Greenhouse does a set-lunch with two glasses of wine for 60 pounds, which by two-star London standards is pretty good value.

Australia doesn’t have Michelin stars so it’s hard to compare but I’d posit that there might be five or six restos in the country that could be at two-star standard. If you got out of any of them for $100 for three courses and two wines, you’d be literally robbing the joint. 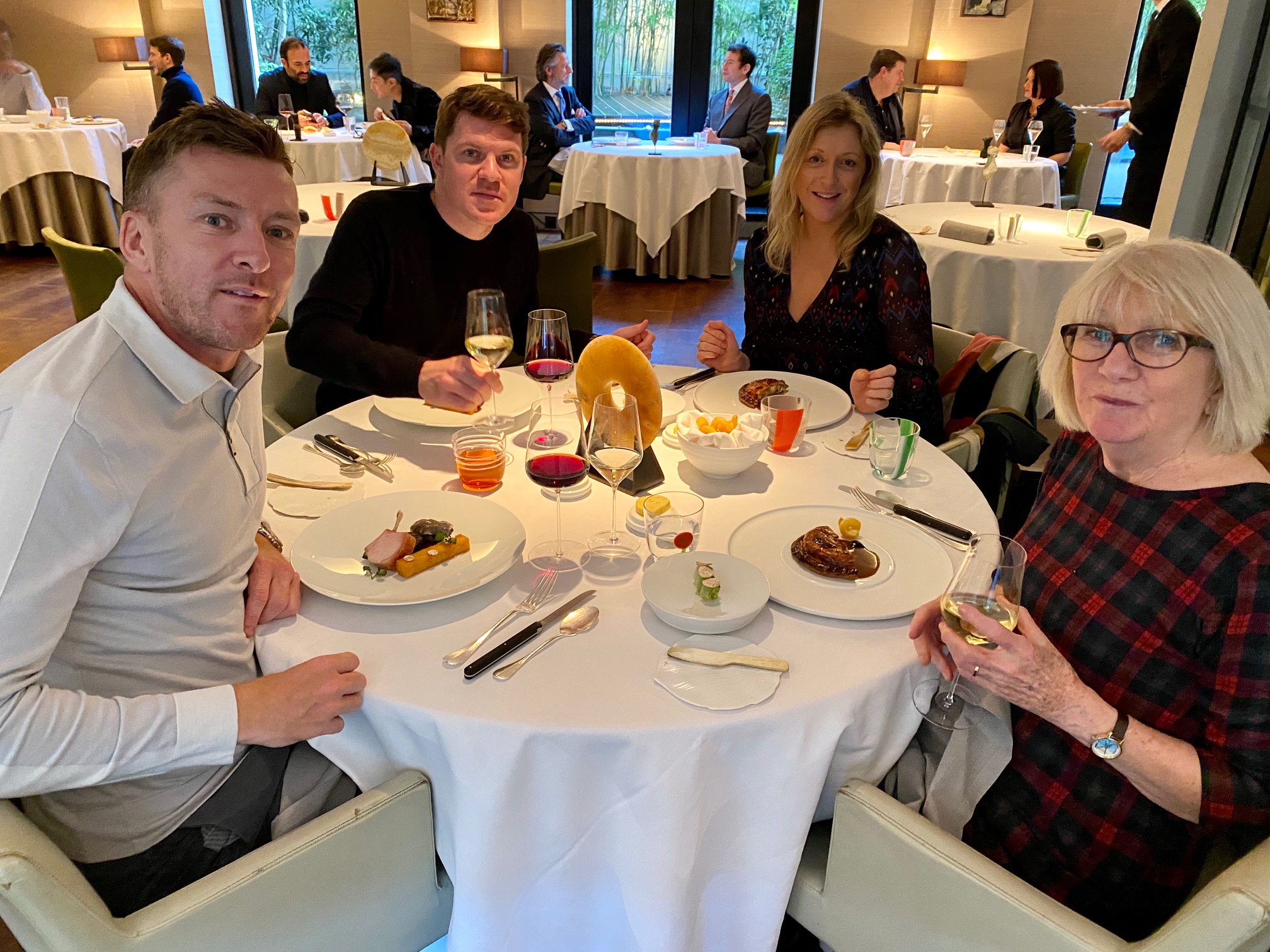 The bargain-hunting dissipates somewhat when my brother orders a bottle of Krug to kick things off. He works in the wine game and the price of the Krug is, he reckons, close to cost and therefore too good a bargain to turn down.  Plus, if there’s ever a time to push the boat out, it’s to celebrate your Dad’s life.

The meal was extremely good. This is serious cooking of the highest order and detail without being overly stuffy. The amuse-bouche selection sets the tone and could probably be a meal in its own right. My brother’s starter of ‘black egg’ is literally that: a black egg with a silver stripe sitting in the centre of a white emulsion. The contrast was stunning and it looked like a work of art.

Until the waiter shaved a tonne of black truffle on top. This was a ‘lifetime’ dish, an absolute worldie.

It took a lot to lure us away from the Connaught but The GH might be the new go-to joint.

After lunch we repair to The Punchbowl, the Mayfair boozer once owned by Guy Ritchie, and tell stories of the old man and lament his passing. It feels both meaningful and, despite being in Mayfair, the boozer has enough dark wood and warm-ish beer to have met with his approval.

If there’s a good thing about somebody dying, it’s the memories of them that seem to resurface constantly and at random moments in the aftermath.

Some of these memories have often been locked away beneath the surface and forgotten almost entirely. They make you want to call the Old Man and reminisce about this or that, before you realise that you can’t. So you wallow a bit longer in the bittersweet feelings it provokes and shed a little tear, or just park it and move on.

I spoke to my Dad the Thursday morning before he died on Friday, and he said three things to me that I recall pretty sharply: 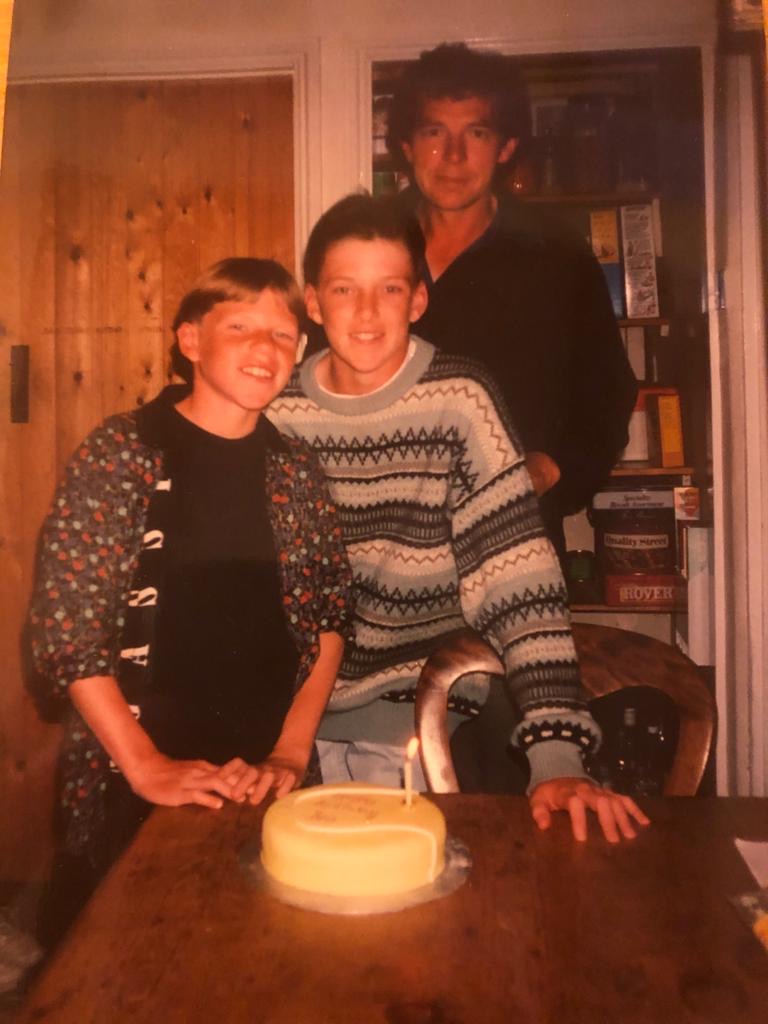 Feeling a little stuck in your training? Life generally feels like its happening around you…

If you’re anything like me – and I’m guessing that we have, at least, a…