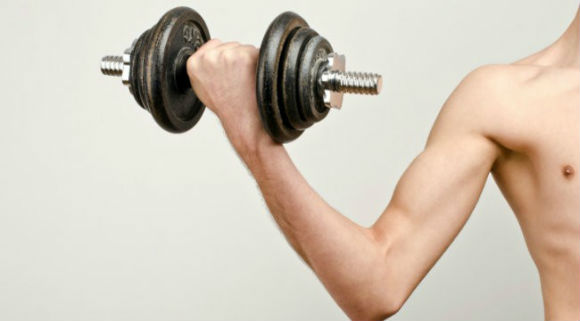 I glanced down at the sheet, a touch apprehensive but mostly bullish that I was holding my own.

It held the results from my latest In-Body body composition scan.

The grid was familiar, the numbers slightly foreign.

The machine is obviously faulty. Let’s try it again.

“Excuse me,” I said to Gordon, my Scottish guide for this experiment, “I think the machine has made a little mistake. Could we try it again please?”

“It shouldn’t be,” he countered, “We’ve just had it re-calibrated.”

Aha, I knew it. The engineer had obviously botched his tune-up job and sent it down a blind alley.


“It’s now accurate to 98.4% of a DEXA scan but without exposure to any radiation. We’ve all tested it and it’s spot on.”

I picked up the report, bade my farewells and trudged forlornly out of the office and the gym.

Good news about the radiation, though.

I sat in my car and pondered how it had come to this.

How I’d let myself get so fat.

You see, a year ago I’d run the same body composition scan and the results were staggering.

My weight had dropped from 82kg to 80kg. 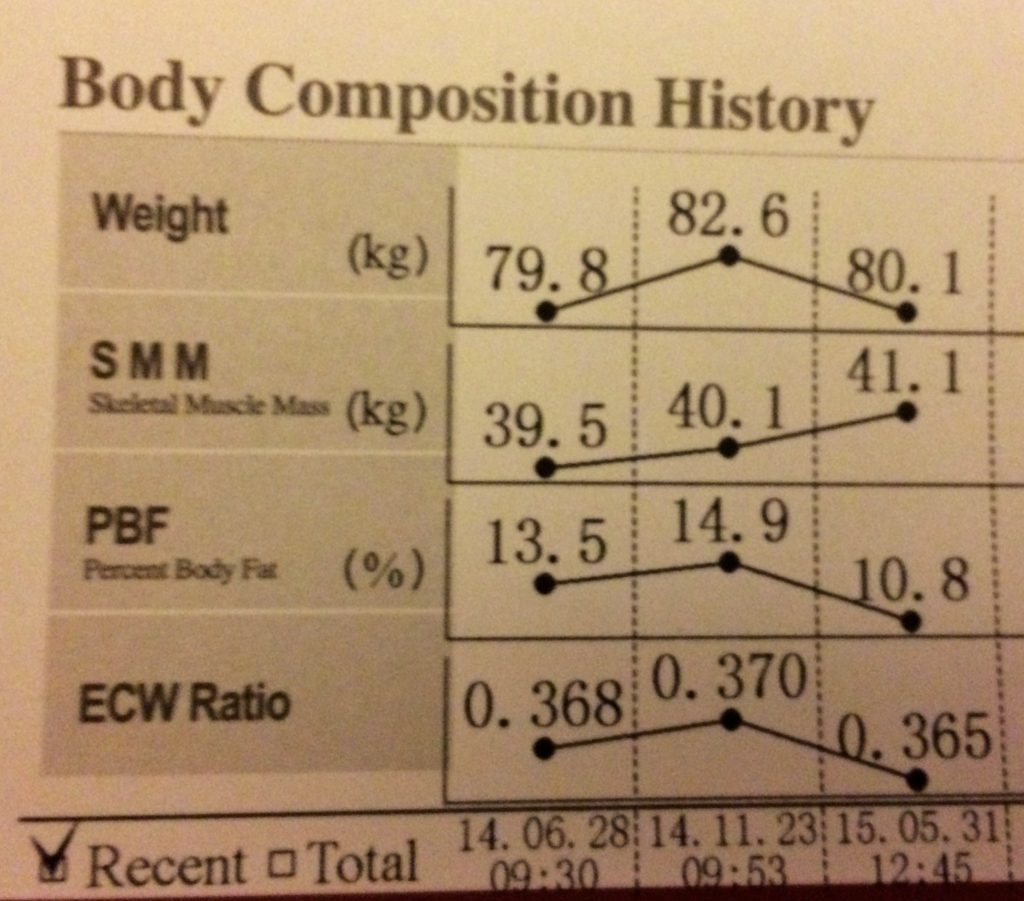 May 2015 Results on the right showing the benefits of Crossfit training.

A regime of Crossfit five days per week, coupled with weekly running interval sessions and tempo runs had turned me into a Dad-terminator in four short months.

I was on track to achieve my aims of running a sub-3 hour marathon whilst being able to bench press my own bodyweight, squat one-and-a-half times my bodyweight and deadlift double my bodyweight – these are considered baseline lifts for someone wanting to start to get serious about strength.

For a seasoned lifter, they should be very easy; for a novice they are a solid foundation on which to progress.

Things hit the skids during a 25km trail race and running was ditched from the schedule. This was initially put down to a legacy hamstring injury.

Later in the year with a heavy emphasis on Crossfit, my moody back spat the dummy and a scan revealed a couple of bulging discs, one of which had broken off and was resting on a nerve.

I’d trained around it but not with the same fervour.

With a bit of time between jobs and a need for a project I was reading the 4 Hour Body by Tim Ferriss.

A section on bulking caught my eye and I started to ponder.

What if I could put on 5kg of size without compromising body fat. In a month?

And what would be the ‘Minimum Effective Dose’ necessary to achieve this?

That was what led me to my first body composition scan in over a year.

And the results I wasn’t expecting.

Losing weight hasn’t ever been much of an issue for me.

Putting it on has always been the name of the game.

I won a prize in a tennis comp when I was around 12 years old. It was a Wilson t-shirt.

The problem? It was a medium size.

My arms were like toothpicks in a tunnel in that shirt.

I longed to be able to just fill the sleeves. Of a medium shirt.

Hardly the loftiest ambition but it seemed an eternity away.

Eventually I got there but I’ve always had leanness on my side and have had to, at various times, resort to legitimate and not-so-legitimate methods to pack on a big of extra size.

In my early twenties creatine drops were dabbled with, as were ephedrine tabs for a bit of pre-workout pep.

Clenbuterol – used to make cattle look more muscular at auction (so you know it must be good and safe for humans, right?) – made me shake so much I could barely lift a glass of water to my mouth without it slopping all over the place.

So that was ditched and we finally settled on nandrolone (or deca-durabolin) which was served via an injection in the rump.

Trying to inject yourself in the ass with a vial of oily liquid spurting everywhere is both as comedic and dangerous as it sounds. Even more so when you’re locked in a toilet cubicle at work.

The results of this were a rapid-fire 5kg gain in around a month, in conjunction with a workout plan derived by Big Dave from the office.

Since those heady days, my weight has hovered around 80kg and I can almost fill the sleeves of a medium T (provided it’s been tumble-dried to within an inch of it’s life for extra snugness).

But I rarely budge much higher than that.

So 5kg in a month, unassisted, using a Minimum Effective Dose, whilst stripping fat?

You see, the MED is important.

You’re a Dad, right. You have a job (mostly). You’re in your mid-thirties (probably). You don’t have time for proper recovery (unless you’re very lucky).

You don’t get to hang around a gym all day (unless you happen to own it).

And this is where Tim Ferriss is very helpful.

Tim Ferriss advocates warming up each exercises thoroughly and then a single set of 7-10 reps on a 5-5 tempo. Each rep takes forever and it really messes with you.

He also chucks in drag curls as a variant of bicep curls.

You can choose machine or barbell variants. The Yates Row is done with a preacher curl bar. Don’t get completely hung up on exact exercises if they are new for you.

As long as the movements are right it should have the same effect.

This entire protocol is tried-and-tested.

Dan John talks about solid hypertrophy gains being achieved by college or school students supplementing their normal diet with 3 protein shakes per day.

That is a fairly achievable MED.

One aspect that both Dan John and Tim Ferris push really hard is rest and recovery.

You literally have to force yourself not to do anything else but stick to the fairly modest training program. Mark the workout days in your calendar and then rest the hell out of it.

No sports, no cardio, no kick-arounds with your mates.

I had been eating two meals per day.

Bumping to six per day was hard initally. At times in the early stages it felt like I was force-feeding myself and eating became a chore.

This wore off after a couple of weeks.

This was problematic for me.

Too many rest days doesn’t work very well for my mindset. Especially when I’m on vacay from work.

So whilst I trained everyday (great), it wasn’t always (or even often) the right kind of training for this experiment.

I certainly didn’t strictly adhere to the protocols laid out by Tim Ferris and Dan John.

But what do they know?

Quite a lot, as it transpires.

Things like soccer matches and trial memberships at other gyms get in the way of major bulking programs.

As do work trips away. But this is life. It gets in the way.

But this was designed to have minimal disruption to the rest of my life.

And, in that respect, it worked. I did everything as normal, but ate a load and put in some heavy sessions.

To ensure measurability I set up accountability emails to be sent to me every night which fed data into the table shown above.

The eating and supplementing aspect were quite easy – every day was a win.

The training and over-training was where I fell over.

79.4kg up to 83.8kg with relatively low effort and disruption to my normal life.

As a ‘Minimal Effective Dose’ this protocol delivers in spades.

I put this down to a lack of discrimination with meals, especially family dinners with wine.

My daily training meant I was simply hoovering up whatever calories I get my mitts on.

You’ll know by now that the title of this blog is misleading.

I wrote it at the beginning of the month full of confidence that the results would play out that way.

If you are a skinny hard-gainer who is looking to pack on a couple of kegs, supplementing with clean protein (rice protein or pea protein, for example) and fish oil is effective.

Three chocolate milkshakes a day is hardly a chore.

Pair this with a 3 x weekly weight training program or even ratchet it up to something akin to the one Tim Ferriss prescribes (although it’s probably not immediately suitable for beginners, in my humble opinion), and you should see some decent gains in size as well as strength.

If you then ensure your evening meal is clean and cut out the wine and carbs, and stay disciplined during the day you should see decent results in musculature as the fat drops away (or, at least, doesn’t increase)

Would I recommend this approach?

Hell, yeah. It’s easy to follow, for one. It really is a Minimal Effective Dose.

It also appears to work pretty well and very consistently.

The 4 Hour Body is packed with case studies. Tim Ferriss seems honest and Dan John preaches the “gospel of truth”.

I’ve read very little, if anything from either that has caused me any doubt.

I discussed my results with Canberra weightlifting competitor, trainer and all-round strongman, Mitch Pike, who deadlifts 300kg off an 8-9% body fat and his advice was simple: cut back a meal and a shake each day and make sure everything is clean.

So, sadly, it seems you can’t quite have your cake and eat it. That was my downfall in all of this.

But it was worth a shot

August’s experiment is to strip the fat whilst maintaining the weight and building more muscle.

My body is crying inside…

A high protein, high fat breakfast that fills you up all morning and keeps the dreaded carb cravings at bay.

When I travel for work my diet and training routine invariably suffers. 5am starts often…

The 9 Food Mistakes That Are Fuelling Your Dadbod

Derek may be blind but he has decent taste @slinky

Beat the crowds. Only one of us is flexing 🏖 #

One of my all-time favourites flashed up on the fe

Few extra reps required to get #superfitkid into h

Whiskey & fruit pastilles - what more can I guy as