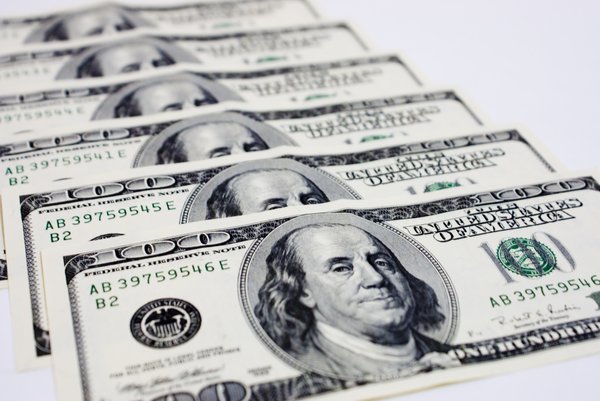 Do you know how much money you’ll have to live on when you retire?

Do you know how much you’ll need?

Newsflash: You Absolutely Should

A figure of A$1m is typically bandied around as being the amount you’ll need in your pension pot to afford to retire in the style to which you’ve become accustomed.

However, this number is much-debated with some experts judging the amount needed to be closer to $2m, reasoning that the time-resistant effects of inflation will render $1m in today’s money far less meaningful in 20 years time.

To the uninitiated and those without a Phd in Personal Finance, this can seem really daunting and with good reason; it’s freaking confusing.

If you fit into this category, then I’m going to help you out – BIG TIME. I’m going to tell you exactly how to make $1m ON TOP of your current pension plans.

By simply laying out the strategies that people far smarter than you and I have developed, and condensing them into a single resource that breaks down, step-by-step, the things you need to fast-track you to a more enjoyable and stress-free retirement.

Investment Tips To Get You Rich

This isn’t a get-rich-quick scheme. I won’t be identifying any unicorns for you to invest in. There’s no advice about how to start a business and then sell it for millions.

It’s much more prosaic than that. But therein lies the beauty; because it’s so simple, literally anyone can do it and reap the rewards.

[MASSIVE DISCLAIMER: I’m not a financial advisor so if you decide to act on any of these tips, you’re doing so at your own risk. I’ll let you know where I’m involved though.]

The absolute key to success here is taking action. Thinking about the future is scary and saving for the future is boring, right? That used to be how I looked at it.

I’m now challenging you to change that mindset and think about investing for the future as the most exciting thing in your life. Or one of them.

What I am reasonably sure of is that if you follow each of these steps, you’ll be well on the way to a better financial future.

Albert Einstein called it the 8th Wonder of the World. Compounding your gains will be the single most important factor in making an extra $1m before you retire. 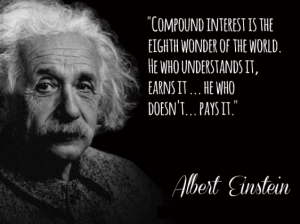 Check out the example that I’ve created with www.moneychimp.com. A $5,000 initial investment has been left for 25 years and, assuming a 7% annual growth rate, has grown into $27,137 at the end of the term. 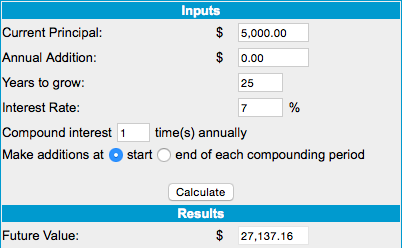 But wait, it gets better. Read on…

You’re probably thinking: okay, cute, turning 5 grand into 27 large is pretty cool. But that’s not going to help me retire.  In fact, that will barely cover the cost of the stair-lift that I’ll need to have installed in my house. If I’ve not been shipped off to a retirement home by then.

So here’s where we’re going to add the secret sauce. And fast-track the hell out of this bitch.

By adding regular monthly savings to our Money Machine we can supercharge the growth and put ourselves well on the way to that extra $1m.

I’m taking the same starting point – a $5,000 initial investment – but this time we’re going to thrown in a regular monthly contribution of $500 as well. Nothing else. Just $500 per month. 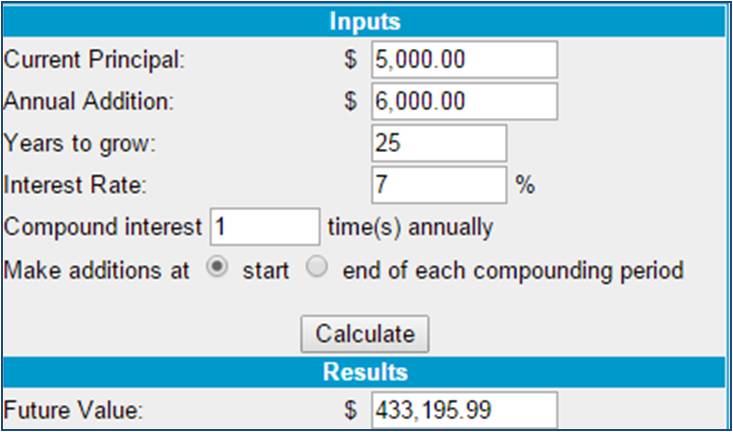 Pretty neat, huh? Instead of the $27k return at the end of 25 years, we now have a pretty chunky $433k – close to half a million dolllars.

Why $500 as a monthly investment and why automate it?

$500 is an arbitrary figure. It depends on your salary and, up to a point, what you can afford. By automating it so it leaves your account on the same day each month, you’re baking it into your personal finance workflow so that, after a while, you don’t even notice it going out.

Jim Rohn talks about a 70-10-10-10 rule of thumb when it comes to directing your take-home pay. It is a beautifully simple model.

I like this model because its simple and covers all bases.

If your net salary is $6,000 per month, then $500 per month should be a pretty conservative effort.

If $500 seems to much and you can’t afford it, DO IT ANYWAY. You will always be able to find other things to skimp on during the course of a month to enable you to afford it. Try it for 3 months and see.

It will be the best habit you ever develop.

Where should I invest?

This varies but if you’re under 40 then a good answer is the share market. Why?

Because you want to become an ‘owner’ of companies, rather than just a consumer. Apple gadgets are cool and fun, but it’s Apple shares that will help you retire.

But don’t think you can beat the market; you won’t.

Sure, you can swagger around telling everyone about doubling your money on this-or-that red-hot stock. But you’ll be keeping quiet about the other three you lost out on. Professional fund managers – that’s guys whose job is to manage money – rarely make consistent long-term gains. If you find one who does, stick with him. 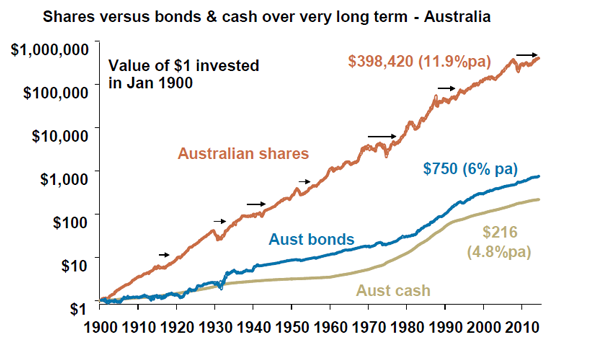 This is why you need to be invested in the stock market to make that $1m (Source: AMP)

Instead, buy the ‘index’. This is an investment fund that tracks the performance of the stockmarket or ‘index’ it is invested in. Index funds are so powerful that Warren Buffet said this about his will and where his assets should be invested for his wife after his death. The full article is here.

My advice to the trustee could not be more simple: Put 10% of the cash in short-term government bonds and 90% in a very low-cost S&P 500 index fund. I believe the trust’s long-term results from this policy will be superior to those attained by most investors — whether pension funds, institutions or individuals — who employ high-fee managers.

Index-funds are what’s known as ‘passive’ investments. Because they simply ‘track’ the index, they don’t require expensive investment managers to run the funds. Which means less of your gains are eaten up by fees and charges.

Hot on the heels of Tip #2 is this beauty.

But if you invest in an Index Fund that costs of 1% or less, then you’re going to hit the $1m mark a lot sooner. Take a look at this.

A funds manager charging you 3% p.a. delivers the same investment return as your low-cost index fund charging 1%. Yet the total value of the investment at the end couldn’t be more different. 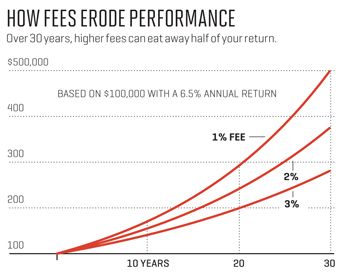 We’re talking $500k versus $280k. That’s the power of compounded charges. But for no increase in performance. In fact, as the Warren Buffet article alludes to, fund managers have actually under-performed the index over the past 30 years.

So if you transplant that into the graph below, you’re actually paying $220k in additional charges ON TOP of an underperformance in growth. That’s CRAZY.

You’re paying someone a lot of money ($220k) to mismanage your money. That’s has to be the definition of insanity, right?

How do you avoid this?

Jim Rohn was a farm boy from Idaho who became one of the world’s greatest personal development gurus and a mentor to Tony Robbins. A lot of the advice in this post comes from Money – Master The Game by Tony Robbins which is one of the most practical and generous pieces of financial literature that’s surely ever been written.

His knack for translating complex messages into seemingly simple aphorisms lives on, as evidenced in his 70-10-10-10 rule (outlined above). One of his famous quotes is:

Whether it’s upscaling in your job, forging a little sideline or going full-bore into business, you have to constantly BE more if you want to get more.

A lot of people graduate from university, learn a job for a couple of years and then decelerate the learning process, opting to merely be competent and do an average (or marginally above-average job in order to stay employed).

By up-skilling you’re increasing your earning potential exponentially. New skills could land a promotion that will easily cover the $500 per month we’re investing in an index-linked fund or generating enough from a side project to invest that much (and maybe more).

It’s also fun, interesting, challenging and rewarding to learn something new. Isn’t it?

5. Top Up Your Pension

Your superannuation (or pension) is about the best investment around because its slathered in tax breaks. Each $0.70 (or thereabouts) you invest is rounded up to $1. Pretty cool, right?

By making additional pre-tax pension contributions you can charge ever closer to the mystical $1m in additional earnings mark.

If you’re 30 years old, earn $100k per annum before tax and have already accrued $50k in super, by the time you’re 60 you’ll have a superannuation pot worth $418,745, assuming 7% annual growth. This is with your employer’s very generous 9.5% contributions (in Australia, anyway).

Both numbers include charges of 1.5% per annum (fees under management). This also factors in inflation and rises in living standards over the 30 years we’re looking at. Run your own calculations here.

Does it put you $1m richer than before you started reading this article?

Nearly. The top-end totals come to $798,174 before we factor in the intangible that is investing in yourself.

Have I told you anything you didn’t already know? Possibly not.

Are you already doing this stuff? Probably not.

As Jim Rohn said, doing this stuff is EASY. But NOT doing it is also REALLY easy, which is why we don’t all do it.

But this is the chance to make close to an extra $1m before you retire without really changing too much or having a million-dollar idea.

Isn’t it worth trying, just in case it actually works?

Now that we’ve sorted the $$$, let’s get to work on the body. ‘7 Days Of Power’ provides the toolkit for you to overhaul your diet & workouts for 7 days – for free!

As we hurtle through life at breakneck speed, punctuated by the inevitable peaks & troughs…