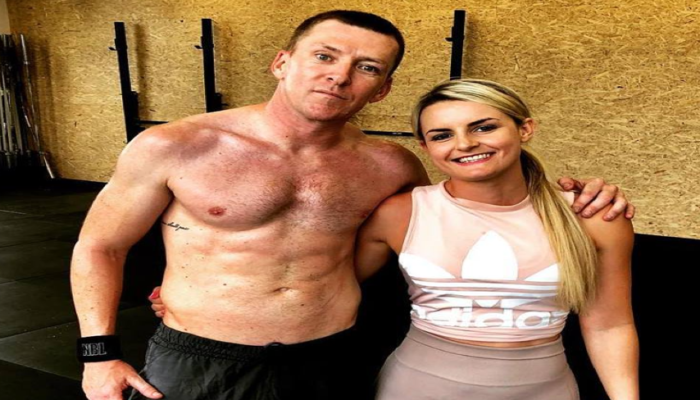 This was never meant to happen.

I went to the early morning class knowing that I had a big work day ahead, including a work Christmas luncheon. It was Thursday.

I’d done a double-session on Monday, a single Tuesday and Wednesday, and every weekday the preceding week.

Prior to this I’d done precisely zero CrossFit classes in the past year, possibly two years. Yet I was feeling good and really enjoying the training. And the beatdowns.

Here’s how it panned out.

It was a steamy day and the stretching had me beading up with perspiration. By the end of of the 6 minute core workout I was dotting the floor with sweat – always a good sign.

The strength component of the workout was a really fun mix of stuff I like. I used the first couple of sets to tune up my back, which has been super-gippy of late. The belt was on standby but I muddled through without it and kept a ‘normal’ grip throughout.

The WOD (workout of the day) was done with a partner and, again, was pretty enjoyable. My post-surgery shoulder made the pull-ups extremely slow and ugly. By the end I was doing doubles or triples to get through them.

Sweaty high-fives and cuddles all around, but only because I picked the best partner.

Having remained abstinent throughout a boozy business lunch, as my associates enjoyed a silky bottle of Cotes Du Rhone and a between-courses palate-cleanser called “Le Colonel”, I stayed true to course and hit the early evening class.

I was due to meet my pal, Skinny Roche, for the class but he got delayed and couldn’t make it.

Again, the core warm-up got the better of me and made me realise just how underdeveloped I am here. Probably need to get back to yoga, even just once a week.

I varied the exercises in the strength workout and chucked in some hang-power-cleans, another old favourite, although they could probably be more accurately classed as reverse-bicep-power-curls. Whatever the name, they were pretty gassy at the higher numbers on each round.

For the WOD I mixed in some double-unders and some ring-rows. Double-unders are awesome but work you over. The ring-rows simply replaced pull-ups because I knew I was done on them.

A little fatigue crept in but the row and double-unders give you a chance to really grind it out so this was a blast.

This time I varied some of the exercises.

Skinny Roche finally turned up for the next session and so instead of grabbing my bag and sloping out the door, I joined in the warm-up for a stretch and carried on, as much for the chat as anything else.

Skinny’s one of those chaps whose normal conversation sounds like a hilarious story so it was fairly easy. We goofed around with the core stuff as my back was firing up a little.

For the work, I went back to the deadlift but dialled in the weight a bit. Actually, I did the same with the rows and the bicep curls but tried to keep focused on solid form, especially the DLs.

In the WOD, I stuck to ring rows and went back to the hurdle hops. After 13 minutes it was over and I felt ever so slightly smashed. Still plenty of energy for a photo with coach who had given me a nudge to get me over the line.

To be honest, I’d never even considered a double-Crossfit session until this week.

I’d previously done some pretty solid running sessions at lunchtimes and then gone to Crossfit in the evening, but, from memory, that didn’t usually end well.

But, like anything, it’s the starting and head-talk that’s the biggest obstacle. Once you overcome these and begin the workout (which, let’s face it, isn’t really work, it’s more like play) it becomes easier to keep going than it does to stop.

Once the third session started, and the ego and adrenalin kicks in, it’s just another 50 minutes of work / play to complete. Easy days.

Just watch out for the crash afterwards.

Ask any Dad (or guy, for that matter) what their fitness objectives are and upwards…

Is It Ever Okay To Quit A Crossfit Workout?

Today I bailed on a Crossfit workout for the first time. It was about three…