It’s been just over a year since I started Crossfit training. To say I was in a bad place mentally when something prompted me to finally get along to my local box is something of an understatement. A dead man walking is putting it a bit strongly, but isn’t that far from the mark.

So given my relative experience, or more the fact that I’m no longer a complete Crossfit beginner, it feels like an opportune time to reflect on my experience to date, assess my progress but mostly to see if any of the myths surrounding “the sport” have been dispelled.

The frequency of injuries incurred through Crossfit is an oft-cited criticism and one that could probably justify a thesis on it’s own. My own early experience with Crossfit and injuries is outlined here but since I’ve been training under supervision, I’ve remained relatively unscathed.

When you train at anything with a ferocious intensity the odds of getting injured will go up. Depending on the programming, Crossfit sessions can comprise 3 different workouts in an hour. So it stands to reason that an increased rate of exertion will translate to an increased rate of injury. Right?

At my box, Crossfitters tend to arrive at a class 10-15 minutes early and spent this time stretching and doing mobility exercises before embarking on a warm-up that could almost double as a workout in it’s own right.

When the time comes to lift weights, there is usually a gradual build-up to a working weight and anyone going all Klokov is quickly brought back down to earth.

The fact so many at my box return for 5/6 sessions per week, week-in week-out suggests to me that far from being an injury farm, Crossfit is actually pretty safe.

Myth 2 – Crossfit is a cult

The number one thing people have said when I’ve told them I’m doing Crossfit is this: isn’t it a cult?

I can understand where this comes from and how it can sometimes look from the outside.

Crossfitters do talk about Crossfit. A lot.

Crossfit does have it’s own quirky lingo.

Crossfit outfits are a little more out-there than you might typically see at a regular gym.

But this is no different to running groups I’ve trained with. And far from being a clique I’ve found people to be super-friendly and approachable. Far more so than at regular gyms and at running squads.

Myth 3 – Crossfit makes you throw up

The avatar Pukie the Clown (pictured) is used to represent the Crossfitter who has pushed it past the point of return. I think this used to be more of a thing than it is now. 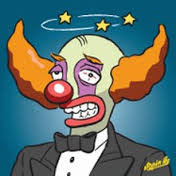 I’ve never seen anyone chunder and no-one has ever mentioned it in my time there. Maybe fitness standards are rising and nobody spews anymore. RIP Pukie.

This is another view commonly associated with Crossfit. And, again, I get it. As I alluded to here, even as a fairly seasoned gym-goer, I was a little apprehensive about setting foot inside a box.

Pleasingly, I was surprised (and continue to be so) at just how scalable classes are. This means that if you’re an outright Crossfit beginner you start with a broomstick before moving onto an empty barbell. Chin-ups are done assisted with bands. Other movements are worked into through progressions.

I wouldn’t exactly call it genteel but there is a reassuring level of care taken when breaking in newbies.

So that’s my Crossfit experience to date: myths have been dispelled; personal bests have been recorded; movements have been achieved that I hadn’t even attempted pre-Crossfit (hello, muscle-ups & handstand push-ups); and some semblance of sanity has been restored.

If this is a cult, I’m probably brainwashed.

Join the Super Fit Tribe and receive my e-book containing 26 Life Hacks PLUS weekly workouts and articles straight to your inbox.

Ask any Dad (or guy, for that matter) what their fitness objectives are and upwards…

Crossfit Beginner? Here’s How It Goes Down

Revisiting my first experience with Crossfit a bit over a year ago. Here's how it…

Is It Ever Okay To Quit A Crossfit Workout?

Today I bailed on a Crossfit workout for the first time. It was about three…