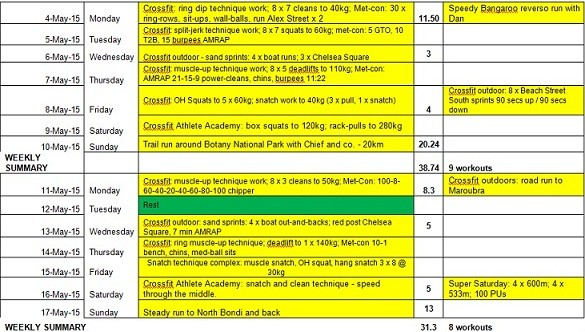 A wise man once told me that progress is not lineal. And so it has proved in Super Fit Dad-land as the burgeoning juggernaut of PBs, progress and self-satisfied improvement has careened off the road and screeched to an abrupt halt. The wheels, it seems, have well and truly fallen off the wagon.

What has happened to precipitate such an almighty decline in performance? And has it really been that bad? Let’s look at the symptoms for clues.

Landing your first ring muscle-up is a BIG DEAL. This is a move that, to begin with, seems so foreign and unnatural that there is no obvious means to achieve it. The bastard lovechild of a chin-up and a tricep dip performed on gymnastic rings using something called a “reverse” grip, it should be approached with fear and deference. After a several near-missses I finally hit the jackpot after some intensive tuition and cues from Coach Stowe at Crossfit Coogee. Next thing I knew I was nailing multiple single strict reps in a session.

From here it should have been onto multiple unbroken reps, kipping versions; next stop the Crossfit Games, right? Well, no, actually. Instead it feels as if I’ve gone completely backwards and can barely get a single. I’m back to where I was six weeks ago.

OBJECTIVE VERDICT: I haven’t actually practised them that much in the intervening period and given that this type of skill needs a lot of attention early on, it’s probably not much of a surprise that I’ve slipped back a bit.

REMEDY: Keep practising progressions as if I’m still a learner to ensure competence throughout the movement.

Symptom 2: No power during running intervals

350 and 530m repeats off a two minute rest is a tough but very manageable session. So when it feels like running through treacle about 100m into the second rep, I realise that something is amiss. There’s no injury to speak off, just an absolute lack of power through my glutes and thighs.

I valiantly soldier on completing the session at something like a fast jog pace – maybe 55% of my max.

OBJECTIVE VERDICT: I don’t think I’ve become slow overnight. My previous three weeks training comprised 8, 9 and 8 workouts, mixing intense weight-training (Crossfit) with running interval sessions (sand and hills) and adding long trail runs into the mix. I’ve felt a bit depleted and this has been reflected in the quality of some of my sessions.

REMEDY: Ease back a bit. Whilst my workload might not be huge by elite athlete or coach standards, it’s clearly not sustainable for me at the moment given my other commitments.

I’m feeling confident approaching the bar to pull 140kg for a few reps. It should be well within my grasp, being less than my previous best and waaayyyy less than the 280kg rack-pull I managed less than a week ago. [A rack-pull is a half deadlift off blocks used for practising the second phase of the lift. I seemed to be disproportionately strong at these compared to a full deadlift ].

I can barely believe it when the weight doesn’t budge. At all. I retreat to discreetly wipe away the tears and gather together the few remaining shreds of my dignity before revisiting the bar and just about getting it up for a solitary rep in the least convincing fashion you can imagine.

OBJECTIVE VERDICT: Again, I don’t think I’ve lost too much strength. The increased frequency of my running sessions has probably taken a slight edge off my lifting and I was probably still fatigued from the rack-pulls a few days before.

REMEDY: Back off and don’t get too disheartened. 160kg was the DL for this year and that’s in the bag. I think the target needs to be revised to 200kg to make it scary and meaningful.

So where does this leave me? Well, in obvious need of a rest, firstly. This week has been scaled back to five training sessions and a weekend off which is a complete contrast from the double session Saturdays and long runs on Sundays I’ve been used to.

I also have to find a way to schedule rest days and stick to them to ensure burn out and CNS fatigue doesn’t creep in. This can be harder than you’d think as the endorphin rush of exercise seems to have dangerous qualities for those with addictive personality traits. Ultimately, though, this will be the key in ensuring I’m in the condition I need to be to achieve my  shifting goals for the rest of the year.