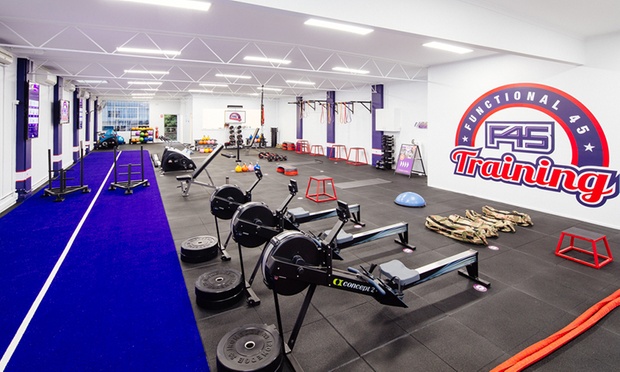 If you haven’t yet heard of F45 training or workouts by now, I’d be somewhat surprised.

Like CrossFit, veganism, intermittent fasting and the ketogenic diet, someone you know is likely to be doing it, and that involves them telling everyone they know (and even people they don’t know) that they’re, well…doing it.

So you’d be in a fortunate bubble of normalcy if you hadn’t heard somebody banging on about it.

‘Functional’ 45 minute HIIT workouts in identical studios are cropping up on almost every street corner in major cities and every suburb elsewhere. Quite literally. There are now around 500 F45 studios in Australia alone and another 300-ish elsewhere around the world. All in around four years. That’s some going.

You’re going to be working at a fairly high to very high intensity for around 35 minutes which is plenty for anyone whose job isn’t to exercise or train for a sport.

On a cardio day (Monday, Wednesday, Friday) your heart-rate will be jacked up and it will stay there, despite brief periods of respite. On strength days (Tuesday and Thursday), you’ll be pushing a weight that should challenge you for between 2-35 seconds which is a decent amount of time under tension. This will also push your heart-rate up.

Either way, you’re working at around 80-90% for the duration of the workout. That will hurt anyone. They frequently ruin me and I consider myself reasonably fit.

2. People Are Losing A Lot Of Weight. Fast.

The amount of collective weight being lost through F45 is scary.

Regular punters now have a mode of training that they can do every day whether they’re in inner-cities or out in the sticks. Combine the intensity of the workouts with the availability and you’re onto a winner.

A woman at #superfitkid’s swimming lessons has lost around 12kg in a year at F45. Another has taken it up another notch and has parlayed her initial interest in conditioning to full-time bodybuilding and bikini comps.

This isn’t exclusive to F45 but, in terms of scale, and at the moment, the collective results are scaling up.

Like CrossFit before it, F45 isn’t cheap. But that isn’t necessarily a bad thing.

It costs around $75 per week here in Sydney. A regular gym costs close to $25 per week.

Now, I’m all about “driving the value” as my old buddy Adam Cruiseman used to say.

But…there are two key considerations with this.

Firstly, at $75 a week you can’t afford NOT to go at least 4 times per week. I couldn’t, anyway. So, by virtue of the cost, you’ve locked in 4 workouts per week at a very high intensity. To repeat: for the average punter, that is plenty to tone up, increase aerobic capacity, increase muscular endurance, build some muscle…all the good stuff we want from exercise.

Secondly, you may go to your regular ‘$25 a week’ gym four times per week but, unless you have the single-minded focus and discipline of, say, Elon Musk, you’re extremely unlikely to work as hard as you will at those four F45 sessions.

And so, whilst F45 is “expensive”, you could argue that it provides very good value.

My good buddy swears off F45 because he says he doesn’t have time for “star jumps and aerobics”.

I tell him to try one of the strength days because a) the cardio days would kill him and I don’t want that on my conscience, and b) with the right weights, you’re working your muscles to failure with similar, if not longer, TUT (there’s that time-under-tension, again) than if you were doing a standard 3 to 4 sets of 8-12 reps in the gym.

But with shorter or zero rest breaks. So you’re conditioning whilst building muscle.

5. You Can Train For Free

All F45 gyms offer a minimum one-week free trial where you can go as may times as you like to test it out. Do five F45 workouts in a week (if you’re already reasonably well trained) and you’ll see improvements immediately.

I include this point mainly to annoy the feminists and pseudo-lefties who see outrage in everything, and (of course) it varies class by class and gym by gym, but F45 does seem to appeal more to women than men, most likely due to misconceptions such as those held by my buddy (outlined above).

But I wouldn’t go there trying to pick up. For starters, the girl you’re paired with is likely to be fitter than you. She’ll also most likely have her game-face on and be there to crank out a savage workout while you’re flailing away with the 8kg weights.

As with CrossFit (and here’s my article destroying the myths surrounding CrossFit), people will decry the injury rate, the cultishness, the advanced movements being prescribed to new exercisers. Some of that I get (a kettlebell snatch to a beginner?). Some of it, I don’t.

Movement theorists and purists probably hate it because of its commercial viability and success.

My take for what it’s worth (which isn’t much) is that…it gets a lot right.

So if you’re stuck with your regular training, or if a lunch-break workout is the only time you get to train, or you need to lose five kilos for summer, have a look to see if there’s an F45 near your office (preferably) or house, sign up for a one-week trial to see if you like it.

At the worst, you’ll get a few tough workouts to tell you where you’re currently at.

[Disclaimer: I have worked at a couple of F45 gyms and still do some cover shifts to help out. That means I don’t pay for my F45 workouts. But I have nothing to gain from writing this and am always impartial. I’m merely offering my take as a reasonably seasoned exerciser in the hope it proves useful. If I thought it was a sh*t workout, I’d say so.]

Progression, it's said, is the key to success. So, with this in mind, whilst I…