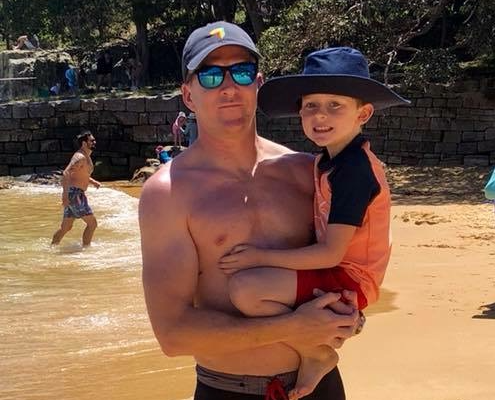 Standing on the scales, the signs were ominous. 87, 88, 89kg…the numbers were rising by the week.

Normally this could be considered progress of the positive kind. These were the kind of numbers I’ve been straining for since I first laid eyes on a dumbbell. The sort of numbers that I’d only dreamed of as a skinny teenager when my only life  goals were to fill the arms of a medium t-shirt.

But now, Houston, we have a problem. A flipping, great big problem.

The problem was not so much the weight but my shape.

Instead of being a jacked-and-juicy 89kg – you know, the sort of shape a back-row rugby union player is, or, perhaps, possessing the wiry musculature of a race-horse-fit Aussie-rules player – I was now in altogether more terrifying territory.

Additionally, some seedy kids I’d been knocking around with had taking to calling me ‘Super Fat Dad’, a crime for which they were severely disciplined (no more ice cream for 20 minutes).

To be clear, it wasn’t a complete disaster.

It was simply that there were now lumps & curves where previously there’d been none. A little extra visceral fat on the hips, spilling over the waistband of my newly-tight jeans. Hitherto, visible abdominals were now hidden behind a modest paunch.

All fairly standard Dadbod stuff, the accoutrements of age and an expense-account diet.

In short, I looked like ‘before’ photo of an 8-Week Challenge winner – the one in which you try to look as bad as possible to ensure that the transformation has maximum visual effect.

I’ve nothing against this practice, by the way. It’s the standard within the ‘Challenge’ industry and, in fact, the ‘before’ and ‘after’ pictures are usually just one metric that determines the winner, and is one that provides enormous incentive along the journey for the participant.

But it was new to me and I hadn’t seen it coming.

Perhaps I should’ve done. A confluence of events led to this point but when life blurs into an amorphous mess (as it tends to, from time to time) sometimes it’s hard to see what’s really going on.

Specifically, in my case, it was:

Realising I needed to take some action to get back into fighting-weight range, here’s what I did.

A bizarre choice and something I’ve never truly considered or attempted before, but the timing was right on many levels. The aim was to get to a month or the end of the challenge.

My expectation level was low upon embarking on this mission. And yet with each passing day my fortitude seemed to grow. It wasn’t always easy but that’s a story for another time.

Covering some classes for a friend did a couple of things.

It got me back in the habit of getting up at 5am which serves a few different purposes, not least making you very tired by 9pm.

Primarily, it gets the body firing and burning fat for at least two hours more than I would perhaps normally.

It’s also really hard to teach bootcamp classes without doing at least a smidgen of work yourself, either during the demos or partnering up with someone in the class. I’d generally do around 40% of the work which would serve as a handy early morning fat-burner and a decent little warm-up for my own training later on.

For someone trying to ditch a few kegs and a chunk of unwanted body fat, this was a free-kick.

Whenever my motivation waned and I didn’t fancy a full-bore workout, or even as a morning ‘tonic’ before I’d fully woken up, I’d grab my 10kg weight-vest, stick on some Audible or a podcast and get out the door for a 30-40 minute walk around the neighbourhood, sometimes affectionately known as the ‘Coogee Rollercoaster’.

I’d like to say that such a walk is a breeze and you barely notice you’re working hard…but I can’t.

The hills and the steps wake you right up…but…you do feel pretty good about yourself when the ‘walk’ is over.

Instead of church on a Sunday morning, I started attending Brian’s sprint classes down at the local cricket oval.

It’s a family affair and Brian is something of a local legend. He’s also pretty adept at putting together a savage speed session, complete with a warm-up that gets you hotter than a pig on a spit.

I’ve said it before and I’ll say it again, if you want the best results with the lowest dose of work as an aging guy, then sprinting and lifting heavy is what you need.

I was in the gym a lot, post-surgery.

Trying to rebuild the engine, burn off some a little extra padding that I’d accrued and generally get back in shape.

But the workouts weren’t having the desired effect. They were too short, not intense enough to counteract what else was happening in my life (a lot of work events and associated socialising).

In short, I needed a push.

So I jumped into fairly regular HIIT classes, either at my local gym or at the F45 I used to teach at.

I really rate HIIT sessions and these were humbling to begin with. In fact, they remained humbling as my fitness levels increased and a began to push myself harder. I generally hate every single minute of every single HIIT class.

But that’s the rub, right. You’re secretly loving it at the same time.

Anyhow, at 4pm on Melbourne Cup day I was in a HIIT class, wishing I was anywhere but there. And yet secretly delighted that I was there and not anywhere else.

When the fitness was getting back to reasonable levels but other things were going awry, I decided it was time to call in the heavy artillery.

CrossFit has saved my bacon a few times before and this was truly no exception.

The first session back hit me like a baseball bat around the head (and body). But slowly, with each passing day, I was getting stronger and more resilient, the workouts seeming slightly more like old friends rather than hateful foes whose sole purpose seemed to be to break my spirit.

I still can’t do some of the movements, and my shoulder surgery meant that ‘handstand push-ups’ became ‘on the knee push-ups’, much to the mirth of coach and my fellow ‘victims’ in the class.

But CrossFit really pushes me in a way that other classes don’t and I’m keen to see the progress continue.

With this protocol locked down it was time to put in the work and trust the process.

The results are now in so I’ll dive into them in a post or two.